I would like to draw your attention to some interesting aikido films on YouTube that I think shed light on the origins of the kihon dosa we practice in Yoshinkan aikido.

The first is an 8mm film from 1957 of the Aikikai training under Koichi Tohei.  This was filmed by Andre Nocquet, the first western uchi-deshi of Ueshiba, and uploaded by Guillaume Erard… Demonstration at the Japanese Self-Defense Ministry (1957)

The second is a film of the original Yoshinkan dojo that has extensive footage of the early training there.  I can’t find what year it’s from, but based on the apparent youth of Shioda-sensei and the quality of the footage, I would guess it is also 8mm film from the 1950s… Aikido Yoshinkan 1/4  2/4  3/4  4/4.

The thing that interests me about these films is that the early Aikikai film shows exercises that look like the elements of kihon dosa while the early Yoshinkan film shows students practicing funakogi undo and doing kihon dosa that appears half-way in between modern kihon dosa and the exercises Koichi Tohei was teaching.  This suggests to me that something similar to kihon dosa exercises were being done when Shioda studied under Ueshiba.

Starting at 4:00 in the Koichi Tohei film, you can see elements that look like Tai no Henko Ichi and also spinning exercises that look like the ending portions of Shumatsu Dosa.  Here’s a screen capture of Tai-no-Henko-Ichi-ish exercise…

At the early stage of development in Yoshinkan aikido, Tai no Henko Ichi looked substantially similar, as can be seen in the Yoshinkan video at 0:30…

Of course, in the Yoshinkan film, we can already see the characteristic image of Yoshinkan, which is missing in the broken posture in the Aikikai video.  However, the Yoshinkan film shows the shitte entering much more to the side than what we practice today–a side entrance that looks like the Aikikai practice.  This is more obvious by watching the entire movement in the films rather than the simple stills.

Finally, we can see in the next two stills the early Yoshinkan students practicing funakogi undo, in this clip at 3:45… 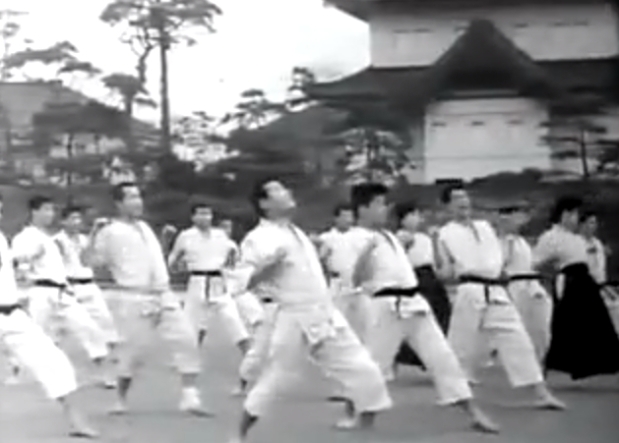 According to Nick, Payet-sensei has taught funakogi undo to the Part-Time Kenshusei (weekend course).  However, the Full-Time Kenshusei have never done it, and, to me, it has a distinctly non-Yoshinkan kinaesthetic.

What I hear about Kihon Dosa is that it was something created after WWII by the Yoshinkan for teaching large groups of people.  But if the early Yoshinkan students and the early Aikikai students were doing exercises that were more similar than the exercises done in these schools do today, then maybe the Kihon Dosa are actually representative of pre-war aikido.