Follow kenshusei Takenaga started aikido in the dojo of a man named Saegusa Ryusei.  Saegusa-sensei used to be around Tokyo and then moved to Hokkaido.  Takenaga never says much about him, but she traveled to Hokkaido for his blessing before the Kenshusei Course started and then went back there this month after it ended.  I guess that says a lot.

The other day, I had reason to go to Payet-sensei’s apartment before he left for Russia.  We were talking about aikido and somehow I mentioned Saegusa-sensei.  He said, “You know, he used to be my sempai at hombu.  He was very charismatic.”

So, I was poking around the Internet the other day and found Saegusa-sensei’s website, when what did I see?  Is it?  Could it be? 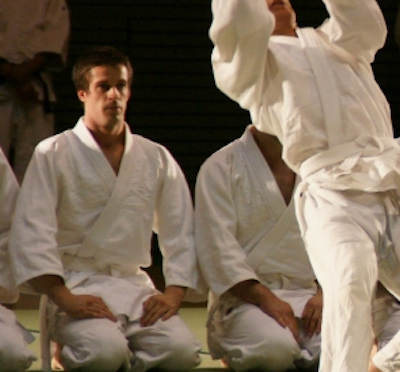 Somehow, Andy-sensei is always finding his way in front of the camera.  Or maybe the camera is following him.  It’s a kind of aikido!

Anyhow, here is Saegusa-sensei’s website.  You can buy an aikido Bible.  Someday, I would be interested in going to one of the seminars.