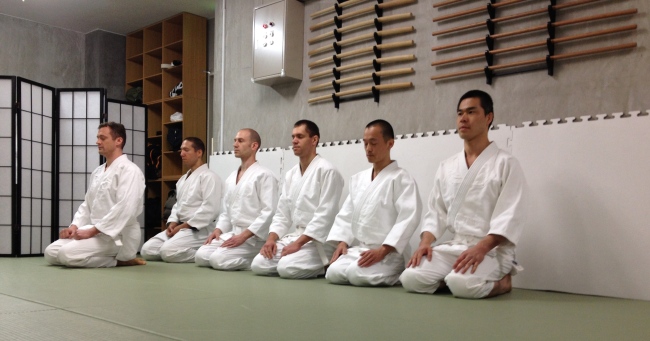 One of the main reasons I chose to do this course was that I sought to challenge myself…in a simple way.  By this I mean, rather than complicate my life with more and more choices and more and more stimulation (Don’t we have enough of that in the world now??), I wanted to zoom in and dig deep.  The Kenshusei Course does just that.  As Kenshusei students, we LIVE Aikido.  The 3 of us Gaijin Kenshusei live together, along with Big Chris (Last year Kenshusei), and train together.  We are at the Dojo by 7am most days, and we leave the Dojo around 2pm.  Our daily ritual thus far consists of: training, afternoon coffee and snack, errands/social time, cooking, eating, sleeping.  And repeat, repeat, repeat, until Friday.  Outside of training, we’ve developed a sort of language of our own.  We talk aikido, joke about aikido, and even dream about aikido.  We talk about the day’s training, the techniques, discuss and coach one another on our areas of weakness, and ridicule one another for the way that we count in Japanese, how we lead Taiso, or on our Kiai (In martial arts, the term commonly refers to a short yell made before, during, or after a technique).  It’s comical how much pleasure we derive from making fun of something as simple as how someone counts in Japanese.  Today as I was speaking with Izzy, our Sewanin, I mentioned to him how I was worried that at the end of the year I’d have a gigantic void in my life because it revolves entirely around Aikido now.  He laughed, and reflected about how when he’d gone home to California for a month recently that noone “got” his Aikido language and jokes, though he wanted badly to share with someone.  Maybe that’s why he’s back 😉  In fact, almost everyone who’s been a part of this Kenshusei program is “back” in one form or another.  There’s something drawing them in.  Is it Mugenjuku Magic??